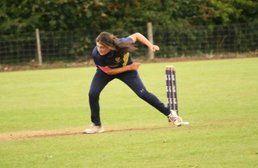 All Round Commitment Secures New Ladies Captain Her First Win

The first league game of 2021 saw Ways host Worfield CC ladies in the West Midlands Women’s Premier League in what was a complete performance by our ladies and turned out to be a comfortable victory with Ways having too much for their opponents.

New Ladies skipper, Hannah Murray, was asked to bat by Worfield after they won the toss, something she would of chosen to do anyway and this proved decisive and costly for Worfield as our top order set out early to make the most of the conditions. Phoebe Chew hit three boundaries in the first three balls in almost T20 fashion with her opening partner Lisette Barden contributing at the other end saw them put on 28 before Phoebe was caught in the covers with a shot that annoyed her but one she will learn from. Hannah Hardwick joined Lisette in the middle making her league debut for Ways and quickly set about the Worfield attack in typical fashion with regular boundaries before Lisette fell to a delivery that kept low (16) with 70 on the board. Laura Wade joined the game and took her time looking to punish the poor balls when Hannah Hardwick also fell to a delivery that kept low (29) with 81 posted. That brought the second of our league debutants to the crease in Palak Dhore who showed great technical ability that will no doubt hold the ladies in good stead for the future. 115 was on the board when Laura Wade played on ( 16 ) bringing another debut to the crease in Katie Guthrie who ,with Palak, did what was asked and frustrated the Worfield bowlers. However Palak fell to an LBW decision soon after Katie’s arrival ( 16 ) with just 121 on the board.

Hannah Murray joined Katie in the middle and the pair added 31 before the skipper top edged one to mid wicked ( 15 ) with the score on 152. Lucy Hardy then partnered Katie as Ways began to push against a tiring Worfield attack adding 36 more before Lucy was caught on 11 with Ways on 188. Abi Crampton partnered Katie who finally fell ( 33) with the score now on 194. The last few overs then had Meghan Hancock-Nolan and Abi doing all they could to push the score still further adding 11 more to finish on 205 and a score that the bowlers could defend.

Worfield were heavily relying on their top order to keep them in the game however skipper Hannah Murray had a wealth of bowling at her disposal and decided to open with Lucy Hardy and Lisette Barden with great effect with the pair only conceding 20 runs in the opening 9 over power play while Lucy took the wicket of Ellie Anderson swinging a ball in on the toes of the opener much to her surprise. Lisette dismissed Olivia Gough before she could get settled and Ways had the opposition at 21-2 in the 12th over. Katie Guthrie came on for Lucy and Lara Jones was punishing anything that was short but she soon got into her stride and took Ways third wicket, caught and bowled Ellie Palmer.

Hannah Hardwick was introduced into the attack by the skipper for the tiring Lisette Barden and kept the run rate down and by the time the skipper introduced herself the score had moved on to 47 however 2 wickets a piece for the both reduced the opposition to 58-7 and any remaining threat was diminished allowing Meghan and our final debutant in the women’s league, Rosie Parslow to wrap things up by the 25th over securing the remaining wickets.

A great all round performance cheered on by a bank holiday crowd enjoying for the most part the sun and the outdoor hospitality on offer was a good start for the young side and while undoubtedly sterner tests lay ahead there were encouraging signs especially with other ladies still to make their first appearance of the season.