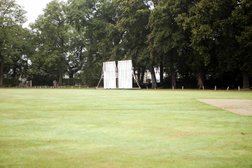 As the clouds gathered and dark descended, Ways won a nail biting victory over Feckenham in the final over, as Harry Mac clung on to a catch at cover to take the final wicket and secure success in a game that had swung one way and another. Perhaps the key at the end was fielding, as Ways clung on to their catches and engineered two superb run outs in the final ten overs, which proved enough to tip the balance.

Ways batted first, and batted consistently to achieve a good score. Skipper Gavin Anderson opened with Jon Gregory, and although they got off to a slow start, they set a secure foundation, exactly what was missing in last week’s debacle at Redditch. Although no one reached 30, all the first seven batters got to double figures, and a series of partnerships, aided by a healthy supply of extras saw us to a substantial score. Jon made 29, pulling a square cutting well when the ball was dropped short before being caught and bowled, and was supported by Steve and Harry, who both played some pleasant shots before being dismissed. Mollie Burke and Abi Crampton put together a good partnership with Mollie striking the ball powerfully, and at 140-5 from 30 overs, Ways were decently placed. The last few overs showed Ways consolidate, with Kiyan Jayhanie playing an excellent innings of 29 not out at the end, including a big six over midwicket. The final total of 185 was certainly defendable, but perhaps only par on the fast scoring astro pitch.

And so it seemed to be as Feckenham got off to an excellent start, with both their openers passing thirty and racing to 60 in the first ten overs. Steve Moore came on to bowl first change, and the game turned, as Steve dismissed both openers in his third over, then struck twice more in his fourth. The run rate dropped with Anas Ahmed bowling a good spell from the top end to support Steve, and with the hundred not coming up to the 23rd over, Ways seemed to be on top. But the fifth wicket Feckenham partnership stuck at it, and young Sam Curtis began to grow in confidence, and with ten overs to go, the score was passed 130 and the target into the fifties. One crucial over saw Curtis strike two fours and a two in successive deliveries and the odds seemed to be tipping back to Feckenham. Then skipper Gavin Anderson took a hand – two memorable pieces of fielding in successive, direct hits from long range throws, saw dawdling Feckenham batters run out, and the odds back to Ways. Abi Crampton was bowling an excellent, and admirably tidy, spell of inswing bowling from the top end, and she took the seventh wicket when a top edged pull gave Anas his second neat catch of the afternoon. With Feckenham having only nine players, this left their last wicket pair together and Ways closing in on victory. However, the pendulum swung once more in the 38th over, as both batters truck powerful leg side boundaries to bring the target below a run a ball. Another tidy over from Abi saw Feckenham face the last over, to be bowled by Mollie Burke, needing seven to tie and eight to win. Singles from the first two balls made the target six from four. Mollie to the 44 not out Curtis, and going for the big hit to swing the game back to the away side, he sliced the ball into the covers, where Harry Mac judged the catch neatly, no easy task in gloomy light and rising tension.

A narrow and exciting victory, and a confidence booster after last week’s shocker, which leaves the 3rds, like the 2nds, sitting at second in their table.