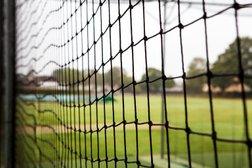 Five Ways 3rd XI maintained their unbeaten run with their fourth successive victory of the season, in a low scoring thriller, which at times rather belied the notion of a “friendly”. Once again, an excellent performance in the field, with every catch taken and two runouts, was decisive in our victory, as was resilience with the bat after a disastrous start to our innings.

Ian Garrett, captain for the day, lost the toss, and Pedmore batted. Opener Gibson slogged the first ball from Lucy Hardy through the leg side for four, and set the tone for much that was to follow by loudly remarking that Pedmore would score a thousand. Gibson slogged two more boundaries, then was deceived and bowled by a slower delivery from Lucy Hardy, who struck again next ball when an inswinging yorker bowled Shadwell. This was followed by the most substantial partnership of the match between young opener Zak Porter and Ethan Middleton, who kept the score moving with aggressive running between the wickets, and Proctor in particular showed a sound technique and played well. Ways’ bowling and fielding was always good, and stopped the Pedmore innings getting away, with the run rate never rising much above three an over, despite the positive approach of the young Pedmore batters.

Steve Moore settled into a typically intelligent spell, varying his pace and movement, and it was he who made the breakthrough, when Middleton drove too early at a ball Steve held back and chipped a catch to Harry McDermott at short extra cover. From this point, wickets fell regularly. Smart fielding by Richard Parslow at backward point produced a run out, then opener Porter top edged one from Steve into the leg side where Meghan Hancock-Nolan judged the catch neatly. Joe Baker hit three leg side boundaries, but then played on to Steve attempting to repeat the shot to a ball that was not short enough. Steve finished with 3-16 from his eight over spell. Harry Parslow also bowled a good spell, and Meghan Hancock-Nolan picked up two wickets, aided by a diving catch behind the stumps from Gavin Anderson. Richard Parslow came on and ended the innings, with Anthony Hardy taking a neat catch at mid off, and then affected a run out on the very next ball. 97 all out, and what seemed a very achievable target.

The first few overs of the Ways’ innings however put the target in a different light. Kayden Skelding bowled an excellent spell, conceding only one scoring shot in his first four overs, and having Ian Garrett caught behind and Gavin Anderson chopping on, both to deliveries that bounced more than the batter expected. With Amanda Benyon falling to spinner Baker at the other end, after eight overs, Ways’ score was 6-3 and the innings in serious trouble. Harry McDermott and Mollie Burke began to repair things, Harry striking Skelding for boundaries through the off and on side in his fifth over, then Mollie striking Baker down the ground for four to get her innings under way. However, resistance seemed to spark something in some of the Pedmore players, and the atmosphere turned unpleasant as the “chat” turned into what can only be described as persistent sledging, orchestrated by one player in particular. The partnership had reached 40 when Harry top edged a cut to backward point for 18, but Mollie continued, scoring especially down to third man. Lucy Hardy fell quickly, but Steve Moore joined Mollie and with the score in the 70s, the back of the target seemed to have been broken. However, at 76, Mollie fell for 29, holing out to backward point just as Harry had done, Richard Parslow entered and struck a huge six from Gibson over square leg, but then was bowled by his slower ball an over later, and when Harry Parslow middle one straight to midwicket, at 91-8 the game was in the balance, especially as opening bowler Skelding returned. Meghan Hancock-Nolan then played with great courage and determination to assist Steve, and with ten overs still to go, run rate was not an issue. Gradually, the score inched closer to the target, and then Meghan nudged Skelding through the slips for the match winning boundary. No – pulled back just inside the line, two taken, still two to get. Steve then just cleared slip with a top edge for a single – scores level. Meghan bunted the next ball past square leg, and we had won by two wickets.

So excellence in the field and resilience and determination with the bat after that terrible start, and Ways had managed everything that Pedmore had to throw at us, legitimate and otherwise, to maintain our unbeaten run and secure our fourth successive win of the season.