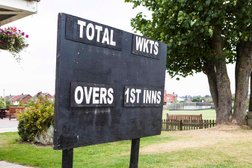 For much of the game, it seemed that last week’s match report could be copy and pasted for this week with maybe the odd changed name. “Batting frailties… not enough runs… brave performance in field… in the end too small a target to defend”. But despite an almost identical total as last week against Tenbury (131 in 39 as against 133 in 39 a week ago), this time Ways bowlers and fielders did even better, and in the end, in an encounter it would be fair to describe as “feisty”, defended the target with some margin to spare.

After a dramatic opening over featuring seven wides and the first of a number of near meltdowns, the Ways top order found it difficult to cope with the pace and movement of Lewis Brough. One that lifter had Laura Hill caught in the slips off the splice, Iain Wingfield was bowled off his pads, and Jim Braddock after a couple of nice shots chipped a catch to short cover from a ball that stopped a little. Chris Webber, having survived an appeal for caught behind off Brough, soon followed, beaten by the left arm inswing of Field. Jon Tovey and Zo Ahmed played some shots but both also fell to Field, and when Ian Garrett followed to the same bowler, Ways were reeling at 59-7, and under pressure from a distinctly vocal Romsley side.

Dave Kendall, up the order to 9 this week, then orchestrated something of a recovery, well supported by a more patient than usual Sabir, and then when Sabir also was deceived by a ball stopping on him, Hannah Murray accompanied Dave, and the two partnerships added over 60 between them. Once the quicks were off, the Romsley spinners proved less effective, and Dave in particular took advantage of a series of full tosses to fine the legside boundary. Dave topscored with 33, but was yorked by the returning Brough, on his way to excellent figures of 5-38. 131 though looked insufficient, and typical of recent understrength batting performances that have left us too much to do in the field. However, the track wasn’t the easiest, with some balls bouncing and others stopping in the pitch and is it transpired, Romsley were to find it no easier than us to make runs.

That wasn’t evident at first, as with opener Brady driving powerfully, Romsley raced to 25 from the first five overs, and a comfortable defeat seemed in prospect. Hannah Murray had other ideas. Having seen Field survive a confident LBW shout, she then yorked him with a beauty [30-1], and in her next over, this time had an LBW appeal answered in the affirmative to send the first of a run of Romsley batters back without troubling the scorers. The key wicket perhaps was the skipper Jarvis, who tried to snatch a quick single when Hannah almost yorked Brady, and was run out when Chris Webber reacted quickly from slip and just clipped the stumps with an underarm throw. 49-3 and the game in the balance. Sabir than replaced Hannah and produced another impressive and pacy spell, and now the Romsley innings went into free fall. Sabir won another LBW decision to end Vine’s somewhat unhappy day, and then took the crucial wicket of Brady, bowled attempting another big drive, gone for 38, and Romsley now in trouble at 60-5.

Chris Webber’s spin kept the pressure on, and soon accounted for Mason, yards down the track and missing a big shot to be bowled (we are sure Dave Kendall, substituting for Laura behind the stumps, who had had a finger dislocated by Sabir, would have accomplished the stumping!). Peverelli soon fell to Chris, defeated by spin, and then Sabir took the important wicket of Brough, surprised by one that bounced and looping it into the leg side to be caught by JT. At 74-8 game over surely?

A dogged ninth wicket partnership then held us up for several overs, whilst not substantially eating into the target. Sabir nearly broke it, but Dave Kendall couldn’t quite hang on to an outside edge that might have carried to slip. Hannah returned for Sabir, and then finished things off. Another ball that stopped slightly and the mistimed drive was neatly taken at extra cover by Jim Braddock, and with the next delivery, Hannah whistled it through number 11’s defences to finish the game, end with excellent figures of 4-27, and presumably begin next season on a hat trick.

A very satisfying win with which to end the season, which lifted Ways to seventh in the Division 9 table. The greatest credit goes to Hannah and Sabir, who finished with combined figures of 16.5 – 5 – 38 – 7. Plenty to look forward to for next year…