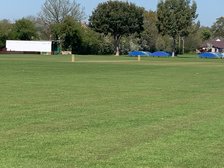 There was much to take from the first outing of the season, but a determined attempt to salvage a draw just failed, the last wicket falling in the final over. Nevertheless, there were many good things about the performance of a somewhat scratch side, notably Hannah Murray’s first club 5-for, and it augurs well for games to come.
Jon Tovey won the toss and put the opposition in, and was rewarded by an early strike from Hannah Murray. However, it proved more difficult to get the second breakthrough as Walker played the supporting role and Levings hitting powerfully over the leg side and straight. At one stage, West Malvern were going at over five an over, but a canny spell from Jon Tovey, including dismissing Levings just after he reached his fifty, clawed things back. Another good partnership took Malvern well past 100, and at 147-2, they seemed well placed for a big score. Two run outs in one over, both affected by Jon Tovey, dismissed both established batters, one a direct hit to the bowlers’ end, the other a throw to the keeper sweeping up after a dropped catch. Hannah Murray then returned and struck twice with her first two deliveries, aided by a neat catch at point by Harry McDermott. Hannah then took her fourth wicket as West Malvern slipped to 160-7. It could have been better still had a relatively straightforward catch not gone down in the next over from the unlucky Nick Porter, who bowled better than his figures would suggest. This would have reduced Malvern to 162-8 and every prospect of chasing a score in the 180 region. Instead, a spirited 8th wicket partnership led by the reprieved Bird (35*) as Ways’ fielding wavered under the pressure took them past 200 until Murray struck again winning an LBW decision with the last ball of the innings and in the process earned her first 5 wicket haul for Ways 2's (5-59 from 10).
Ways’ innings never really threatened to overtake the total, although a brisk start against some erratic bowling from one end raised hopes. But then Owens struck with two wickets in successive balls from sharp left arm inswingers. Veteran “Ians”, Garrett and Wingfield, repaired the damage, with Ian Garrett the more aggressive, striking five boundaries mostly through the onside, before being caught on the crease and bowled for 37 by Tanner. Iain Wingfield and Zoheeb Ahmed rebuilt with a 50 partnership, cautious at first, then accelerating as Wingfield struck three fours in an over from Tanner with powerful pulls and on drives, and nineteen including an overthrow derived five, came off the next over from young left arm spinner Dan Walker. At 109-3 from 27, the game was in the balance. But then Zoheeb holed out at square leg, and Walker went round the wicket for the first time to spear one through Wingfield’s gate for 36, and followed this by inducing Harry McDermott to slightly unfortunately chop on next ball. Jon Tovey and Nick Porter stabilised the innings and seemed to be steering Ways towards a draw, until Nick slogged across the line at Walker and missed. Avnish Handa similarly struck the left armer three times to the leg side boundary, then was bowled off his pads looking to repeat the shot. With just two over left, West Malvern needed two wickets to complete victory, Ways needed two more runs to secure losing draw points. Walker then collected his 5-for as he induced an edge from captain Tovey as he looked to nurdle a single to keep the strike. Shakkir Khan then began the last over by striking the boundary that would have gained the losing draw points – only to be bowled by a good ball just three deliveries from safety. So defeat in the end, but a good game with many promising performances in glorious weather.
Player of the Match – Hannah Murray