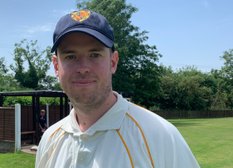 There was always a chance that a little shower was going to hit Masshouse around the start of the game on Saturday. The odd spot had fallen throughout the morning, and the groundstaff had taken the precaution of covering the track prior to the teams turning up, as there had been a couple of very light showers. With both teams eager to play, for differing reasons, the two skippers went out to toss up, hoping that lady luck would grant them a favour. Ways’ Jon Bassett had patently upset her lately, as the coin came down in favour of the visitors, and so Astwood Bank chose to bat first.

After milling around right up until the last second, the decision was made to take off the covers and get underway, despite there being a little rain in the air, and with a very threatening skyline in the direction of where the weather was coming from. So it was no surprise whatsoever when the players were sent running to drag the covers back on after a solitary over had been completed, as rain started to fall again. Crucially, the hoses weren’t rolled out, as consensus was that it was not much more than a brief shower. Oh, how wrong! By the time the players were back in the dressing room, looking for a tennis ball to amuse themselves with, the heavens had opened, and water was pouring over the gutters of the covers and onto the track itself. The 10 minute deluge had ensured that play wouldn’t be underway for around an hour, until the sodden surface had had chance to dry enough for the game to resume. And so it was, that the two teams resumed, knowing that Ways would have at least 15 overs less to chase down any total that bank could muster.

To be fair to Bank, their batters came back out in a positive frame of mind, and played well from the off, with the home side not particularly enjoying fielding in the damp conditions after the break. Players were slipping over in the outfield, and the ball wasn’t giving the bowlers much help, so Ways were doubly pleased when Bassett made the breakthrough, Hancox caught by James Hamilton. Rewards were in short supply for the hosts for the time being however, as Clayton and Ross then rode their luck a little in putting on a sizeable second wicket partnership, before Bassett, back in the attack after the failings of the back-up bowlers finally prized out Clayton. Sameer Khan, also returning for a second spell, then accounted for Haslam and Windeatt fairly quickly to give Ways a toe hold in the game at 185-4. That toe hold, however, became a firm two handed grasp over the next couple of overs, as the Ways skipper took the game by the scruff of the neck and dragged his side well and truly back into it over the next couple overs. First of all, he finally saw off Ross, before having Price caught behind by stand in keeper Usmaan Mahmood, then producing a peach of an inswinging yorker to claim his first senior hat-trick, bowling Boycott. In his next over, Bassett accounted for another Boycott without scoring, this time Clare, with a sharp bouncer that she gently shovelled back to him. He then made it seven wickets for the innings when Kite slashed at a short ball outside off stump, and Khan took a superb low catch at gully. Bank’s skipper now made a brave decision, and decided to declare on 206-9 after 43 overs, meaning that they’d have 42 to try and bowl Ways out. Conversely, it also gave Ways an opportunity to go for the win still, which was a gamble that Price was willing to take.

Hamilton and Chris Curtis had kissed & made up with each other after the previous week’s run out fiasco, and strode out to begin the reply. Bank were going all-out attack, with the twin left arm pace of Freeman and Perkins trying to make the early breakthrough. It came too, Freeman bowling Hamilton with a beauty that swung back in. The game then sat in the balance for quite a while, as Sukhraj Gill and Curtis steadily ticked the scoreboard over, as the visitors tried several options to break a partnership that was starting to annoy them. Clare Boycott had bowled well, particularly to Gill, with little luck, when he played a needless hoik to long on, straight down the throat of the fielder that had literally just been put there. The saying goes that ‘one brings two’, and it proved right, as Curtis departed not long after, totally misreading a ball that was too full to play the shot he aimed at it, and being bowled by Haslam. With Mahmood still settling in to his innings, Khan was out LBW to the returning Perkins, beaten for pace, and trapped LBW on the full. Craig Heath, hampered by a groin strain picked up in the field, played some nice shots as he and Mahmood kept the score moving along. However, a bit of poor calling, and Heath turning blind for a third run proved disastrous, if somewhat comical, as Heath set off for another run with the ball already in the keeper’s hands. Price couldn’t believe his luck as he simply whipped off the bails with Heath stranded several yards down the pitch. The run rate was falling behind by this time, and any real hope Ways had of winning the game were wiped out when Boycott had Mahmood caught behind for 41. With the belief that a target of 174 was required for Ways to pick up the winning draw, Bassett and Jim Braddock made the decision to settle for the draw, and picked up the runs they thought were needed to secure the result, and deny Bank any chance of the victory they desperately needed in their fight for safety. With only a couple of balls left meaning that ways had enough wickets in the bank, Bassett had a last slog, and gave Boycott her third wicket with the final ball of the innings.

Both sides left the pitch thinking that the winning draw was in the bag for Ways, and hands were shaken to signal the end of a competitive but fair game. If only the information given to the teams regarding the proposed targets for the relevant results had been correct…..