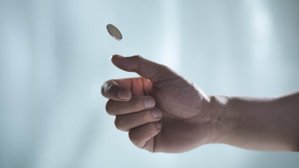 Ways through on coin toss after abandonment...

For the first time in recent years, Ways have made it through to the 1st Round proper of the League Midweek Knockout Trophy after a momentous coin toss went the way of skipper Dave Kendall, who rightly called "Heads" after lengthy discussions with the cricket committee via WhatsApp on Monday afternoon. Unfortunately, time ran out to play the fixture in the orthodox manner due to several days of rain leaving the playing surface at Redditch CC unplayable. Kendall stated " It was tense, but on the say so of Chairman East, I confidently called 'Heads', and despite the coin almost falling the other way, it came down in our favour. Good job it rained really, 'cos we thought we'd get battered if we'd actually played the fixture".
Ways are away at Avoncroft CC in the next round, date to be confirmed.
Share via
FacebookTwitter
https://www.fwoecc.co.uk/teams
Recent news