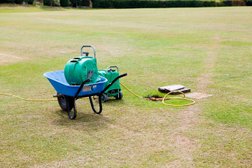 As we started to plan out who might be able to do what this week to keep the grounds in shape and prepare pitches for us to play our Cricket I thought it would be worth sharing with you all the current state of play with the grounds.

We no longer have the luxury of relying completely on two or three people who have previously done everything for us over the last few years to keep the outfield cut and cricket pitches prepared.

There is the same amount of work needed but now with less people to do it. With that in mind its been massively encouraging over the last few weeks and last week in particular to see people helping out, giving it a go and mucking in to get the ground and pitches ready (before the weather got involved) it’s the collective approach we will need to rely on going forward and can only be made easier by a few more people getting involved.
It’s been really positive in showing what we can do as a club.

In the absence of a full time groundsperson the plan is to put in place a rota for the various bits that need doing so people can contribute a bitesize amount of an hour here or there and really make a difference; that might be some time rolling the track, learning how to run the wicket cutter over the pitch and mark it up on the morning of the game, cutting the outfield on the ride on mower, repairing the pitches, using the flymo, marking out the boundary, a bit of strimming around the edges….there a plenty of people about who will be more than happy to show you the ropes if you would like to get involved.

This isnt about lumbering people with a ‘job’ but giving people the chance to learn a new skill or 2 so that they can contribute however much time they are willing or able to; it all helps.