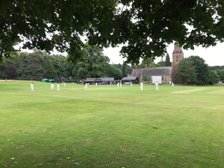 Season 2020 was far from usual, as COVID-19 laid waste to the first half of it, and when we were finally allowed to resume, it was a much changed format for the Saturday 1's & 2's. Gone was the usual league structure, replaced by smaller, regionalised 'cup' competitions comprising of six team leagues, & culminating in, effectively, semi final and final.
There were new teams for both to acquaint themselves with, as the mini leagues were taken from across 2 divisions. This meant a fair gap in ability at times, though there were occasional upsets along the way!
Unfortunately, both the 3rd Team & Women's section's league seasons were abandoned, leaving them to arrange friendlies where possible. As it turned out, they both managed to sort games for virtually every week, so got some decent cricket in.
However, the truncated season, played with a slightly more relaxed feel, still produced some competitive games, and both the 1's and 2's left it just too late to hit their best form, and finished just out of contention for semi final spots. Along the way, there were many decent performances, bot as teams, and individually. In the 1st team, Chris Curtis was a model of consistency with the bat, while Usmaan Mahmood showed occasional glimpses of his talent, and the two Jims, Hamilton and Braddock, waited until the very end of the season to finally hit form. On the bowling front, captain Jon Bassett proved too good for many of the teams in their division, while Dave Kendall proved to be the shock of the season with some excellent bowling spells throughout. The 2nd Team were probably their own worst enemy, as their run of wins at the end of the season showed that they really should have pushed harder for a semi final place, early season inconsistency, combined with bedding in several new players, meaning that they managed to lose a couple of games that they should have strolled. There were good performances aplenty, with many of the new players making significant contributions. All four of the lads picked up from Evesham proved to be very useful additions, with Abdul Azam just about the pick of the bunch, though Khizar Khan looks to have plenty to offer. Matt Stanczyszyn hit the highest individual score in the 2's for many a moon with a fantastic 145 not out away at Astwood Bank, and looks a class player at this level. The 2's bowling attack was given quite a make over, with the welcome addition of Sajid Ali and Abid Khan for much of the season, and the breakthrough of 'Son of Spaceman', Anthony Jones into the ranks. His improvement throughout the season seeing him finish as leading wicket taker, and even break into the 1st team for the final game of the campaign.
No great surprise in the 3rd Team to see Ian Garrett finish as leading run scorer in a quiet season with the bat for the 3's overall, though Will Leech's maiden senior half century was a major highlight. However, there was greater success with the ball this season, and none more so than Lucy Hardy, who took 12 wickets at less than 6 apiece with her left arm swing and seam. Ian Garrett also deserves a mention, as his new found bowling ability appears to have turned him into the 3rd Team's all-rounder!
The Women's 1st Team also managed to attract new players during season 2020 though it was seasoned campaigner Laura Hill that shone brightest with the bat again this year, racking up 217 runs from her 7 innings, with a couple of decent half centuries to show for her hard work. Laura Wade and Phoebe Chew both made significant contributions during the season, and will be key players again in 2021. A very strong bowling attack meant that wickets were fairly well spread among the team, Hannah Murray finishing as leading wicket taker with 8.